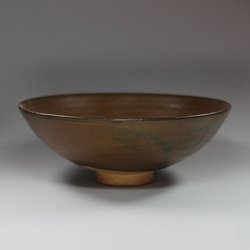 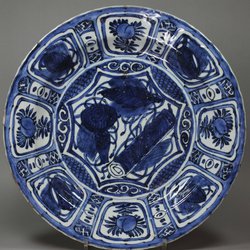 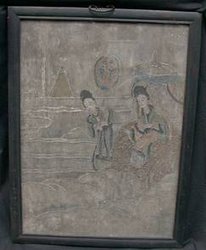 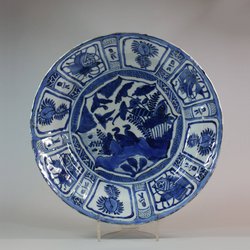 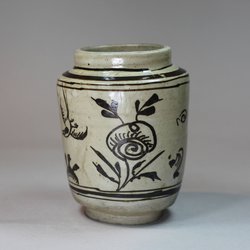 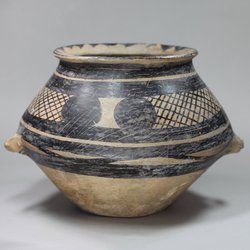 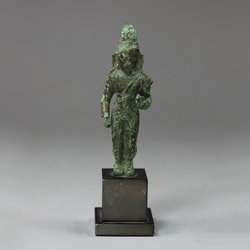 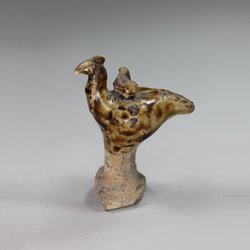 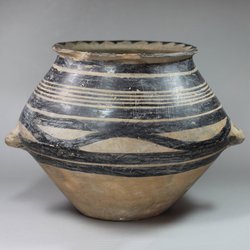 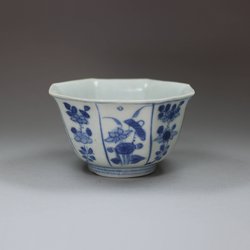 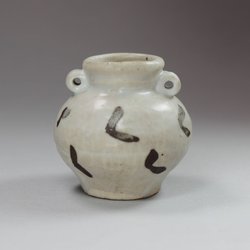 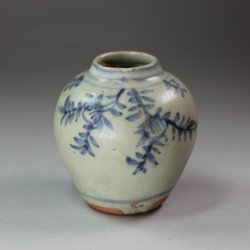 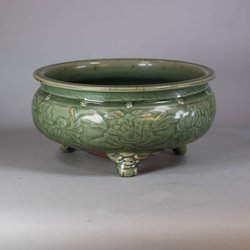 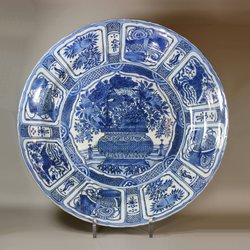 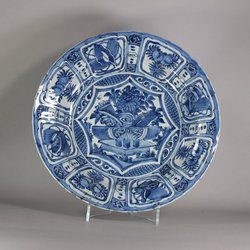 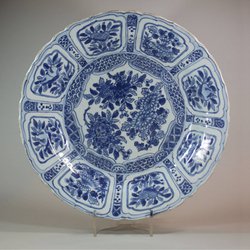 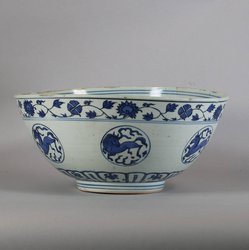 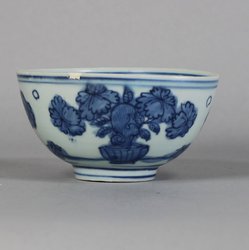 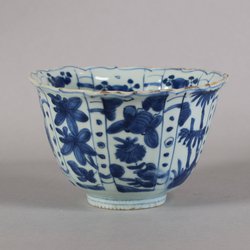 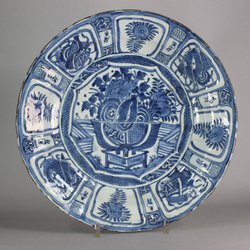 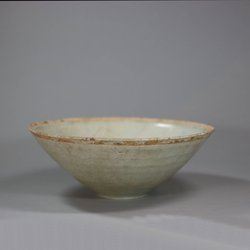 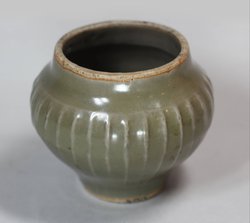 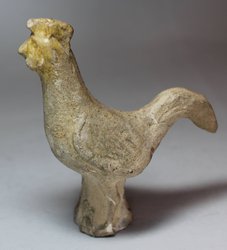 Ming and Earlier Porcelain and Works of Art

This category contains a large variety of Ming and earlier items both ceramics and works of art.
In this section there are three items of particular interest which I am listing here:
1. Chinese blue and white figure of Zhongli Quan, Ming (1368 – 1644), late 16th/early 17th century, in flowing robes with a central badge containing the moon rabbit, one of the twelve ornaments; standing upon a base decorated with the sacred mountains.
2. Chinese blue and white dish, Wanli mark and period (1573-1619), decorated in the centre with a scholar and his attendants beside a gushing rover and below fruiting branches, with Shoulao riding a crane above, the border with shou characters and a garland of scrolling lingzhi, the reverse with flower sprays and six-character mark within a double circle.
Notes:
The ‘transitional’ period, referring to the interim after Ming decline but before Qing control, represents a fascinating period of Chinese history. Like so many other historical periods, cultural and political developments are clearly reflected in the narrative of porcelain design. During this period of upheaval in China, lack of imperial patronage meant that the highly skilled potters of Jingdezhen were forced to innovate and look for new markets in order to survive, resulting in a new range of highly dynamic and varied designs. An expansion of printed material also meant that more visual sources were available for artists, reflected in the new variety of landscape and figurative scenes. Examples of the wares produced for export markets during this period include Ko-Sometsuke made for the Japanese market, where demand was driven by the increasing popularity of the tea ceremony, and wares produced for the Dutch market, with designs incorporating tulip or ‘stiff leaf’ patterns. However, the porcelain which is now referred to as ‘transitional’ generally relates to wares decorated in the Chinese taste, with Chinese landscapes or scenes depicting traditional Chinese mythical figures, as seen on this dish. Often referred to as ‘violets in milk’, the deep shade of blue commonly seen in wares of this period eventually gave way to the famille verte and famille rose designs which became popular in the Qing as enamel technology advanced. Shoulao, god of longevity associated with the Canopus star of the South Pole. Usually represented as an old man, bald, with a high forehead and long white beard, and carrying a staff and a peach. In China, he is one of the three gods known collectively as 'Fu-Lu-Shou san xing' (the three stellar deities of happiness, wealth and longevity), the others being Fu xing (God of Happiness, q.v.) and Lu xing (God of Wealth, q.v.).
3.A moulded and carved Longquan celadon 'dragon' dish, early Ming dynasty, 13th - 14th century, the heavily potted dish relief-decorated at the centre with a writhing four-clawed dragon chasing a flaming pearl, enclosed by an incised wave design at the cavetto below the everted, flattened rim, the exterior carved with a series of ribs to the sides, all beneath a rich green glaze.
Recommended Books
GONGTING ZHEN CANG: ZHONGGUO QINGDAI GUANYAO CIQI Xu Huping & Nanjing Museum Approximately 450 superb pieces of Qing dynasty porcelain from the Nanjing Museum collection are illustrated in full page colour plates and arranged chronologically by reign from Shunzhi to Xuantong. Many of the pieces are imperial and come from the former imperial collection. Twelve pages of useful introductory text, brief introductions to each section and captions to all plates in English. Main text in Chinese. A prime reference on Qing ceramics and quite the best work on the Nanjing Museum Qing dynasty porcelain collection yet published. Recommended. Out-of-print and hard to find. Hanshan Tang
GUGONG BOWUYUAN CANG MINGCHU QINGHUACI Gugong Museum Catalogue of an important exhibition held in the Forbidden City in Beijing showing 213 superb examples of Hongwu, Yongle and Xuande blue-and-white porcelains, along with some later imitations of these wares. This two volume work has fine colour plates throughout, with many of the porcelains being depicted in multiple shots, including bases, interiors and close-up detail. An excellent survey that demonstrates the depth of the Gugong Museum holdings, as many of these pieces have never previously been exhibited. Indeed, we were told that the pieces came from storerooms that had been unopened for decades. Text in Chinese. Now out-of-print and difficult to find. Hanshan Tang
GUGONG BOWUYUAN CANGPIN DAXI: FALANGQI BIAN 1-5. Gugong Museum Magnificent five volume set comprising a beautifully-produced large format series on the highly-important collection of Chinese cloisonne in the Gugong Museum in Beijing. Volume One: Cloisonne from the Yuan and Ming Dynasties. 181 superb examples with 12 dating from the Yuan and the remainder, Ming. Volume Two: Part One of three covering the very large holdings of Qing dynasty cloisonne and shows 300 exceptional examples dating from the early Qing through to, and including, the Qianlong reign. Volume Three: Part Two of three covering the very large holdings of Qing dynasty cloisonne and shows a further 300 wonderful examples ranging from large incense burners to vases and Tibetan Buddhist items. Volume Four: Part Three of three on the Qing dynasty and concludes coverage of this very large holding. Shows a final 300 extremely fine examples ranging from cloisonne ruyi and table screens to archaic-style vessels. All the pieces are attributed as either being mid or late Qing dynasty. Volume Five shows 300 exceptional and extraordinary examples of Qing dynasty copper-body painted enamels, ‘hua falang’, the large majority from the former imperial collection. Includes some objects with European scenes. Includes 28 Kangxi pieces (many with ‘Kangxi Yuzhi marks’), 15 Yongzheng, an extensive amount of Qianlong marked examples plus various other pieces. Practically all the examples are from the former imperial collection. All illustrated in high-quality colour plates. Basemarks are shown. The smaller objects are shown life-size, the larger ones life-size or near life-size Dual texts in Chinese and English. The best visual reference on the subject. Recommended.