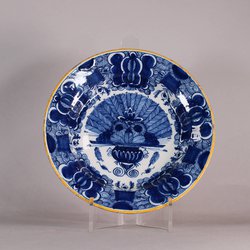 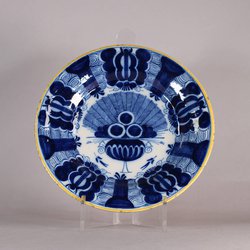 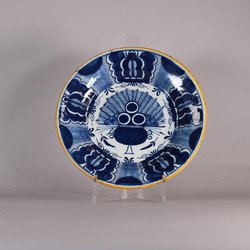 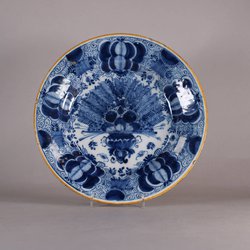 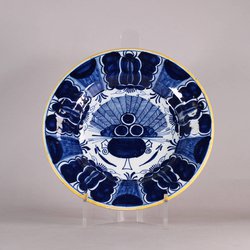 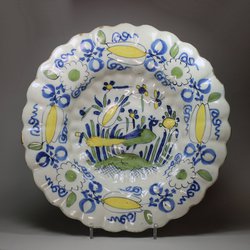 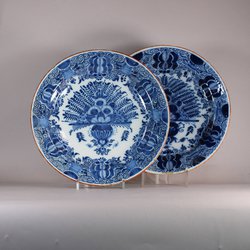 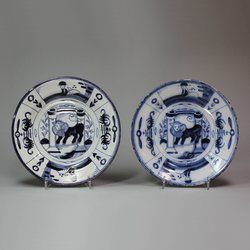 Pair of Dutch Blue and White Delft Small Plates, Circa 1760 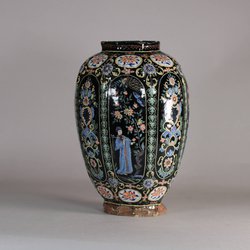 Possibly it was the Dutch potters that introduced delft into England but an English delftware jug has been found in East Malling, Kent, with a silver mount hallmarked 1550, which is presumed to be the earliest date of manufacture. (Malling jugs may be seen in the Museum of London and the Victoria and Albert Museum.)

John Stow's Survey of London (1598) records the arrival in 1567 of two Antwerp potters, Jasper Andries and Jacob Jansen, in Norwich, where they made "Gally Paving Tiles, and vessels for Apothecaries and others, very artificially".[3] In 1570 Jansen applied to Queen Elizabeth I for the sole right to practice "galleypotting" in London and soon set up a workshop at Aldgate to the east of the city. There were already other Flemish potters in London, two of them in Southwark recorded in 1571 as "painters of pottes".[3][4]

The earliest known piece with an English inscription is a dish dated 1600 in the Museum of London. It is painted in blue, purple, green, orange and yellow and depicts the Tower of London and Old London Bridge, surrounded by the words, "THE ROSE IS RED THE LEAVES ARE GRENE GOD SAVE ELIZABETH OUR QUEENE" and an Italianate border of masks and leaves. The rim is decorated with dashes of blue and can be considered the first in series of large decorated dishes so painted and called blue-dash chargers.
From the beginning of the 17th century most English delft had developed a character all its own; it many cases the English delft was warmer and more charming than Dutch delft. This difference in character became more apparent as time went by. However, there are early pieces of delft which where it is difficult to know they origin
Recommended books: