This website site uses cookies to track visits to our website. We do not store any personal details.
There is more information about cookies here.
Accept
Konnyaku – How was it done, and when, and what are the implications? - Guest and Gray
Guest & Gray 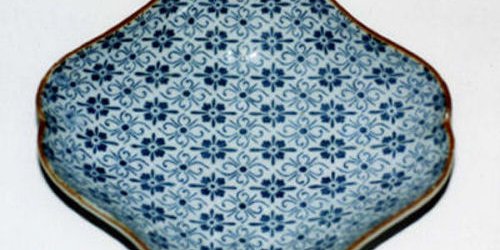 Konnyaku – How was it done, and when, and what are the implications?

This unusual Arita export dish can be dated in three different ways: by the stencilled deer, by the konnyaku stamped groups of leaves, and by the piecrust-moulded wave-border. This border can be seen on a number of dishes that the Japanese copied, inspired by Dutch prototypes. The border that is illustrated was copied in large numbers by the Chinese, resulting in the Chinese examples becoming better known than the original Japanese version. This has led to it being wrongly called the Deshima Island design, which is very different to the delicate Van Frytom pictorial style.

These wave-border and Van Frytom types were probably all made in the years shortly before 1700, and this agrees with the dating suggested in Japan for both the konnyaku and the stencilling on this dish. Both of these techniques are found separately on many other examples, and were used very successfully between c. 1680 and the 1720’s featuring in Arita designs, while konnyaku sherds have also been excavated at the nearby Kakiemon kiln.

Stencilling can be identified by the broken lines, as continuous lines would weaken the stencil paper too much. This was not really paper as we know it, but seems to have been the same material that was used for stencilling textiles, described in detail by Faulkner, in 1988. It consisted of fairly thick, slightly extensible, rather rubbery sheets, which were made from polymerised persimmon juice, which we would nowadays call a “plastics material”, but it was reinforced with criss-cross mulberry bark fibres. Stencilling with this “paper” was also used in this period for finer examples than the deer that is illustrated here, and some included brocading. These were made for the Japanese market and are rarely seen in the West. (I have photos and can give a Shibata ref, but my pieces are now in the V&A: can give ref). It was usual for some freehand additions to be made to the stencilling, especially when long lines were needed, but often the whole dish was stencilled, so because of the curvature of the dish the flat stencil paper gave problems. Sometimes therefore the dish was fluted at the edge to take a slight frill. On a bowl the design could consist, in effect, of a wide stencilled border, with a separate central freehand design that was sometimes varied. (I do have one of these, still, and can give ref to one I gave to V&A) After stencilling was stopped in the 1720’s, it was revived in a slightly coarse form in the 19th century, and used mainly for complex brocaded designs in Shonsui style. It was indeed so successful at this stage that transfer printing was delayed in Arita. (I do have some examples still)

The stamping is called konnyaku, a name nowadays known best as applied to a “health food”. It is made in the form of a stiff blancmange, from an unusual form of starch that cannot be digested by man. This starch is extracted from the corm at the base of a large, cultivated species of Arum lily, called the konnyaku or Devil’s Tongue in Japan because the central “tongue” is very large. In England, starch from the small English arum was used in Elizabethan times for starching ruffs: wheat flour could not be used because the gluten would go brown when ironed. The konnyaku stamps are usually quite small, with many repeats, often rather blurry on export examples like this one, and very blurry on the little central prunus found on many pieces exported to S. E. Asia. (I have one of these still)

Among the many Chinese sherds found in a Thailand river by Richard Kilburn were some Japanese examples of this type, which are now at the Percival David Foundation. However the konnyaku stamps that were made for the Japanese market were sharper on some more formal designs, with fewer freehand additions. Examples of these can be seen in the Shibata Collection, Book VI, published by the Kyushu Ceramic Museum. A notable feature is that the stamps are made entirely of continuous lines of even thickness, except for one rare example, now in the V&A Museum, where it is made up of numerous little oval leaves. (I can only offer photo, if wanted)

Some English authorities have suggested that konnyaku was done with leather stamps, but the Japanese do not believe this. It would be unwise and unlikely for leather to be cut into thin strips or tiny leaves to stick to a wooden holder. There is only one possible suggestion that accounts for both the name and these features of the style. I suggest that grooves were cut in a plaster or clay (subsequently baked) base, and a thick hot paste of konnyaku was pressed against it, which would stiffen on cooling. I have made a mock-up of the process with corn-starch, by heating the thick mixture for one second at a time in a microwave oven and stirring in between. I pressed the putty-like mixture against a grooved plastic bottle, and used the result successfully for stamping with ink on paper. Though such stamps would quickly wear out and become blurry, many more could be made quickly and easily from the same mould. After the use of konnyaku ceased in Arita, it was not revived again in Japan, but it was used extensively in China, probably in the 19th century, though dating is difficult.

The implications of the Japanese dating are important for the dating of Nabeshima. Nabeshima used a form of stencilling to make the tiny markers that guided their otherwise freehand pictures, for example the floral ones with simple exact repeats, that were strongly outlined in blue. These outlines were rather thick, and moreover of even thickness on all the Classical designs, presumably because it would be very difficult to make the famous exact copies if the line varied in width. The even lines and simple small repeats looked, however, quite similar to good konnyaku, which was, of course, a cheaper product. Though a Nabeshima starting date in 1722 was once suggested by most experts, in recent years a 17th century date has been more popular, and is of course much more to the taste of collectors. There is no factual evidence for the 17th century date (see Finch, TOCS Newsletter 2006 and Ko Nabeshima A New View, Edition 3, 2006). The stencilling and konnyaku described above do however provide evidence for a 1720.s date. They were both very successful methods, and both suddenly stopped, for no obvious reason, around this time. The reason for this could however be explainable if the official Nabeshima kiln took over the trained Arita workpeople, and did not want cheaper rivals. Although if the 17th C date is accepted, students will find it difficult to account for the fact that these two techniques were allowed to continue for another fifty years, and then both stopped, for no known reason.